On Thursday July 11th, nurses, doctors, legislators, and community members gathered in front of Hahnemann University Hospital to demand that the hospital–that has been saving lives of Philadelphians since 1848–stays open. Groups of people in scrubs chanted “Stand Up Fight Back!,” and legislators such as Helen Gym, Maria Colette, and Brian Sims, among many others from the general assembly, gave speeches in support of the hospital’s vital work, including the importance of the maternity ward. The demonstration was so large that it closed down Broad Street. 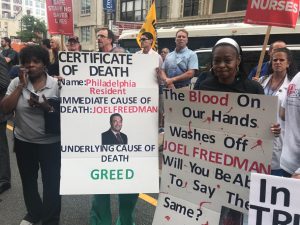 The hospital is under threat of closure because Joel Freedman, an investment banker that owns American Academic Health Systems, wants to replace Hahnemann with more profitable business ventures, such as luxury housing. The closing of Hahnemann is the symptom of a larger pattern of community and nonprofit hospitals overtaken by for-profit companies, which do not prioritize high cost, low reimbursement services of labor and delivery units. As a result, hospitals like Hahnemann, who serve urban, low-income, often communities of color, and two-thirds of whose patients are on Medicaid, cannot compete with companies that don’t consider community needs.

The labor and delivery unit at Hahnemann officially stopped taking patients on Friday, July 12th, continuing the trend of obstetrics unit closures –  where between 1997 and 2012, 13 of the 19 hospitals in Philadelphia closed their obstetrics units for various reasons. Labor and delivery units are seen as one of the least profitable departments because of issues such as high medical malpractice premiums and low reimbursement for maternity care. As a result, obstetric units are overcrowded throughout Pennsylvania.

While at the rally, I found Carrie Santoro in the crowd and learned that she served in the maternity ward at Hahnemann. “There’s nobody else that nerves this niche right here,” she told me. “We can’t afford to lose another maternity ward, they’re all already at capacity.” 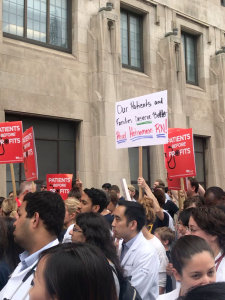 Hahnemann is one of only six hospitals in Philadelphia where babies are delivered, and although they don’t deliver the most babies, they do serve a specific community that vitally requires their support. Many of their patients are located in North Philadelphia, within walking distance of the facilities. The closure of Hahnemann, where so many patients rely on Medicaid, indicates how disposable low-income patients are in a system that seeks only profit. Overcrowded, inaccessible delivery rooms can be dangerous, and further contributes to the issues of maternal mortality and morbidity that disproportionately affect low-income communities of color

Access to obstetric units is important for both urban and rural communities – if the trip to the doctor takes over an hour, the likelihood that a pregnant person seeks prenatal care is much less. One attendee of the demonstration on Thursday, Vanessa Carrion, who was there with her daughter, told me she came in support of her mother who worked as a nurse at Hahnemann for 11 years. “No other hospital is in the dead center of the city,” she said. “A lot of patients wouldn’t make it elsewhere, so I think it’s important.” 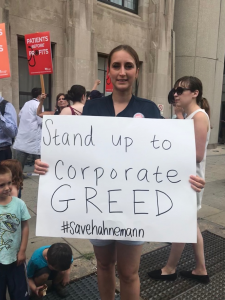 If the trends continue as they have been, the reality may be that there will be very limited access to a quality healthcare system for those that can’t afford premium health insurance. As an organization, MCC has been an advocate to over 125,000 clients for almost 40 years, helping pregnant women access comprehensive prenatal and postpartum care, as well as care for their children in the critical stages from birth to age three. Hahnemann’s closing is a devastating loss for MCC’s clients and the greater community who rely on these critical services. We will continue to do our part in advocating for healthcare in a country that has historically deprioritized the health and well being of women and children.

Natalie Hawthorne is a Policy and Research Intern at MCC. She recently graduated from Oberlin College, where she focused on Gender, Sexuality, and Feminist Studies and Comparative American Studies. She is inspired by the women in her life, and passionate about reproductive justice and learning how to help empower communities in order to effect change. She believes that every person has the right to access comprehensive healthcare, and is inspired by the ways in which MCC provides empathetic care. On her off time, she likes to bike and cook new food.