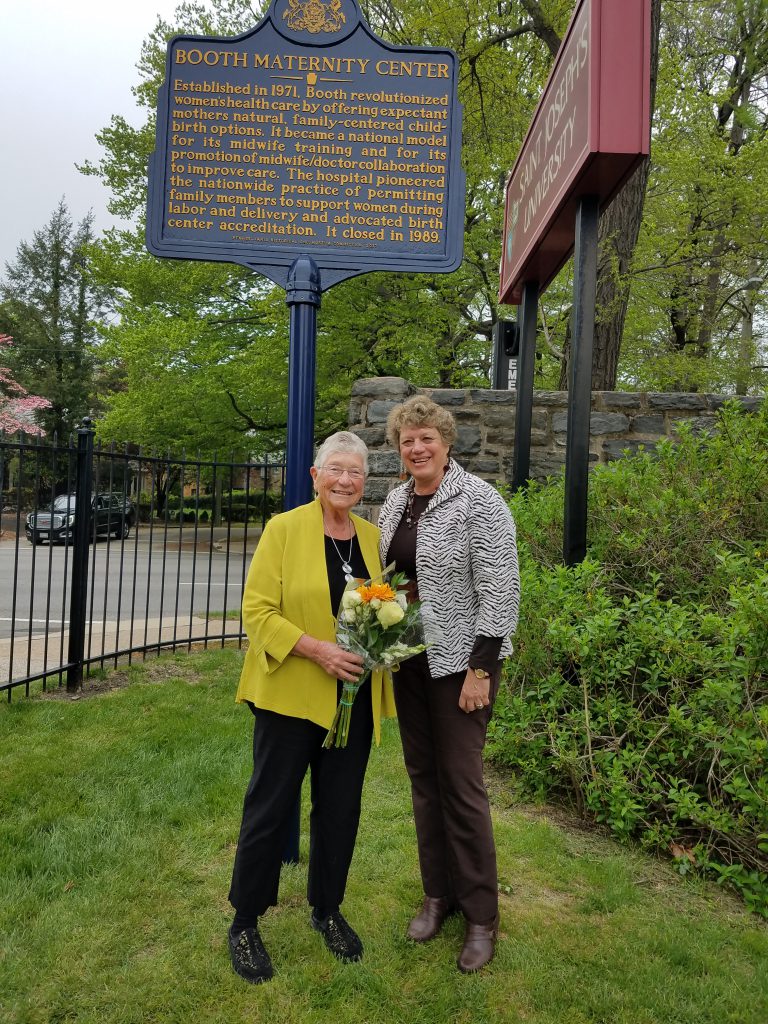 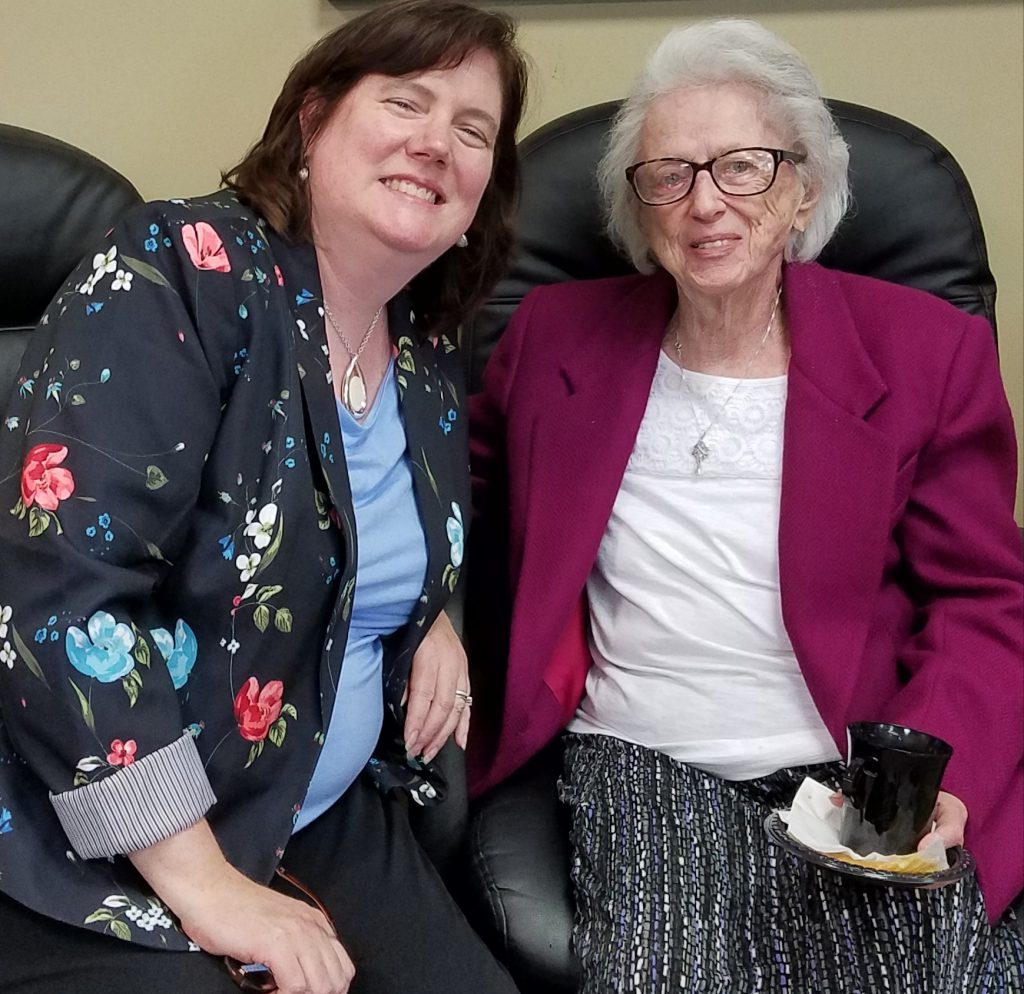 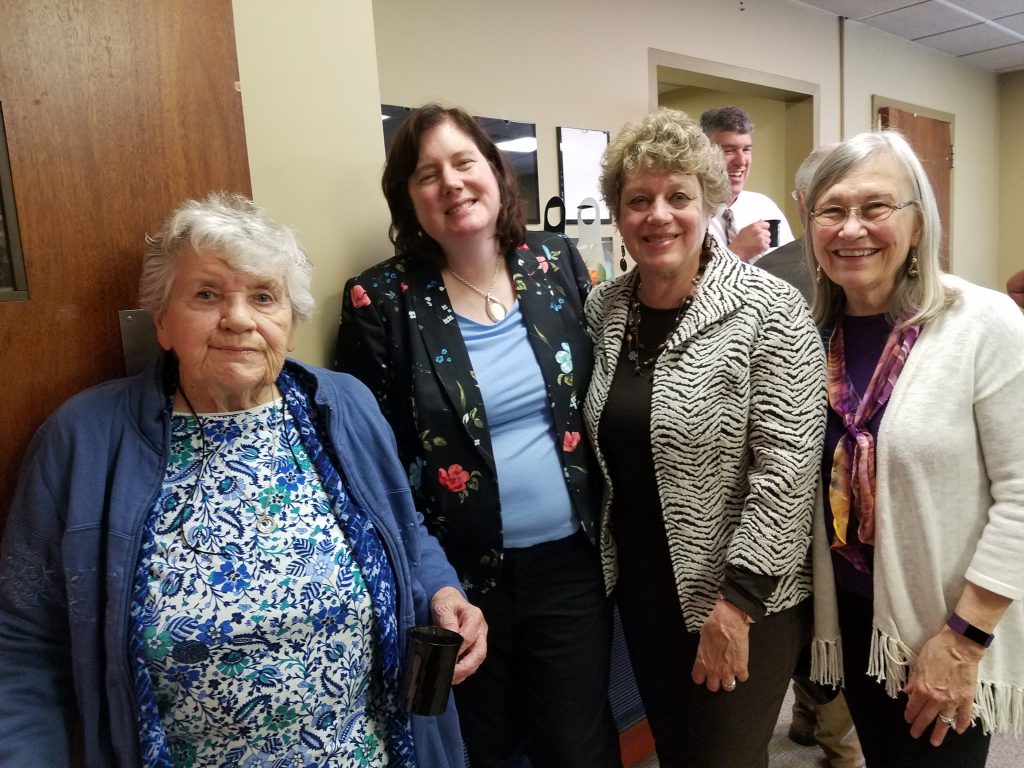 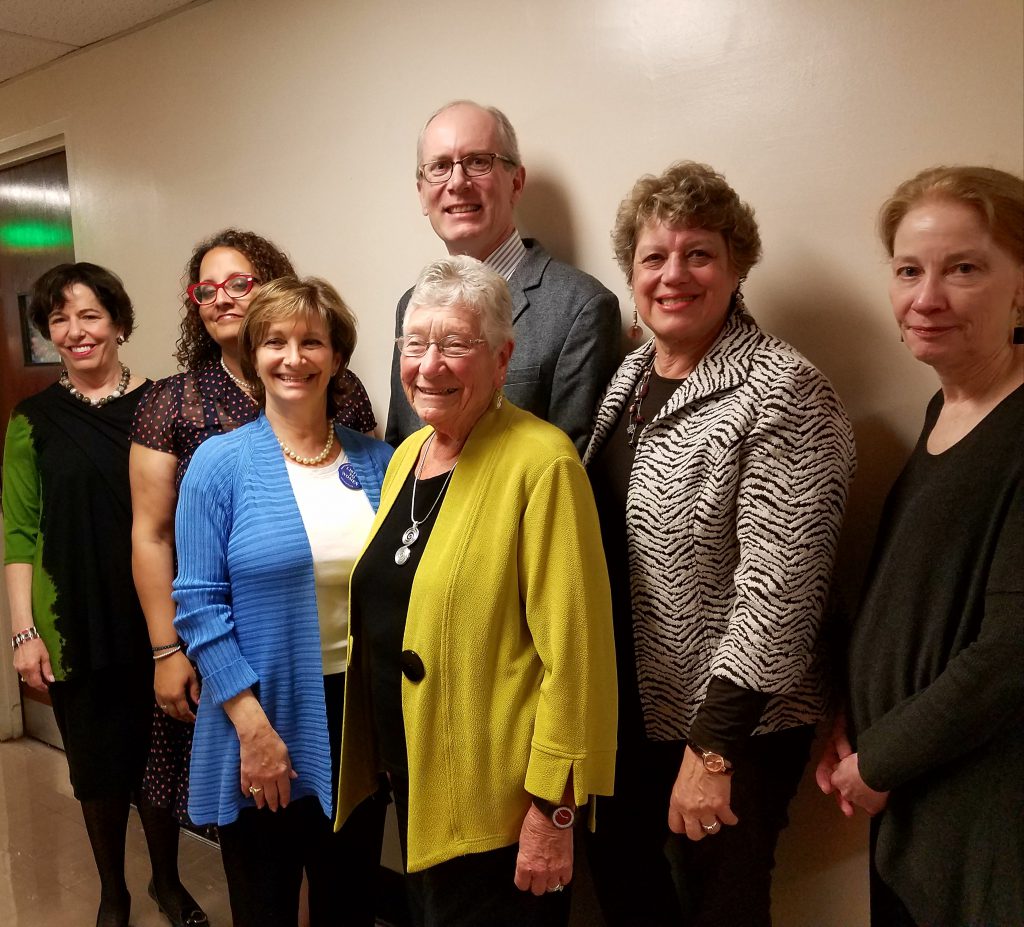 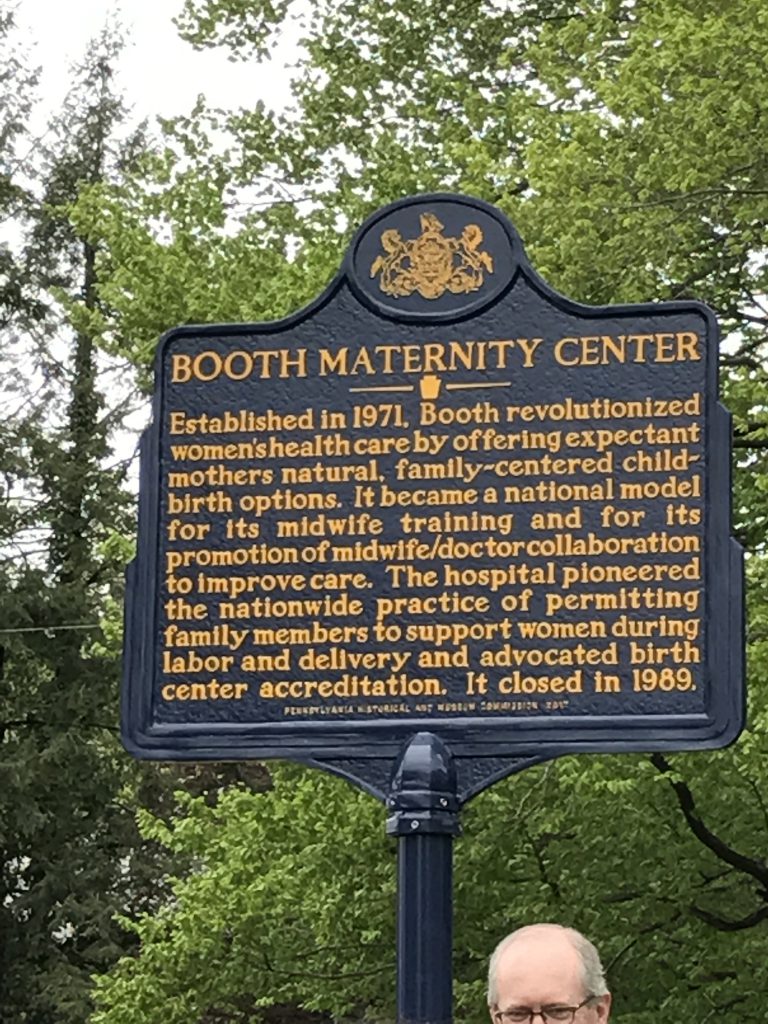 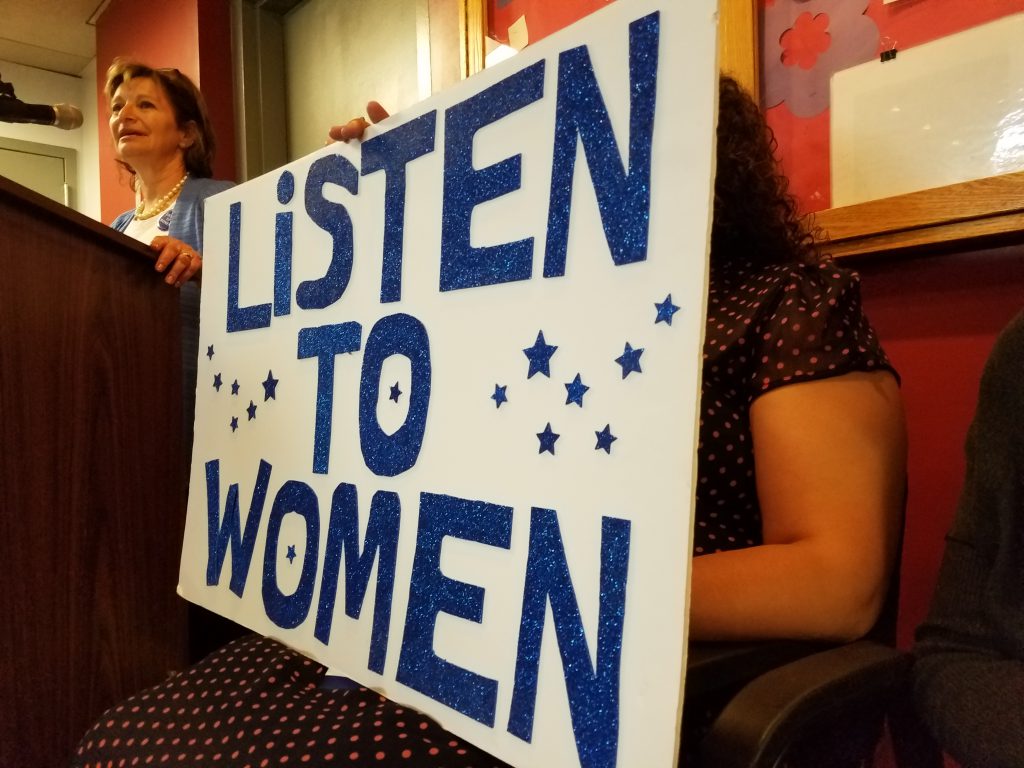 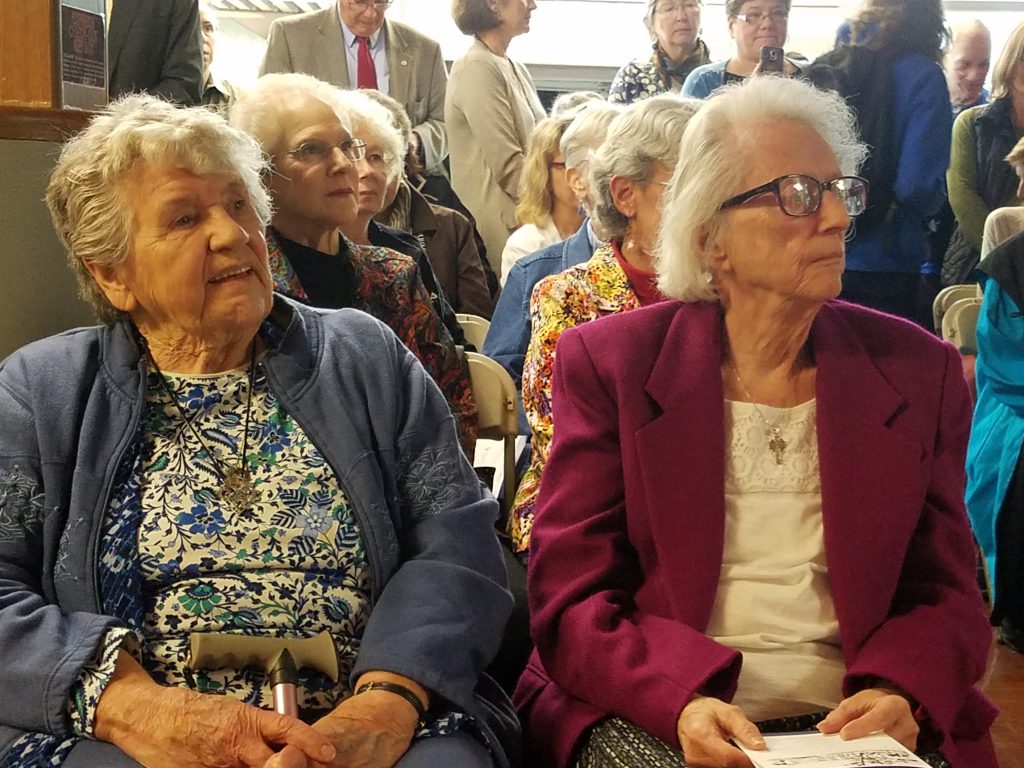 Last week the Pennsylvania Historical Commission unveiled a historical marker commemorating Booth Maternity Center at what is now part of St Joseph University’s Campus. This was significant to me and the MCC family in many ways.  MCC supported the application developed by Bill McCool, PhD, CNM chair of the Midwifery department, University of PA Nursing School and MCC Policy Committee member to highlight Booth as a nationally recognized innovator and leader in developing family-centered maternity care and parenting programs. MCC also cosponsored the dedication event because as PA Historical Commission’s Nancy Moses observed – too few historical sites acknowledge the contributions and lives of women, children, and families.

My interest was also personal. I birthed my daughter, Cory at Booth Maternity Center 33 years ago. I was surrounded by close family and friends and assisted by a nurse midwife and my loving husband. With all of that support, it was clear who was in charge. I was expected to make decisions, express my preferences and actively participate in my care. My baby was immediately put on my chest, rooted for my breast and nursed vigorously. Booth was family friendly and breastfeeding friendly. A birth was a significant life experience that could be empowering and spiritual not simply a medical event. It was the beginning of a new life, a defining relationship, and a family journey.

I worked at Booth for five years, directing the parenting program. We supported families in being the best parents they could be by offering childbirth education, peer support through trained parent volunteers, Booth Buddies, ongoing support groups and parent-child play groups. We had a newsletter- the Listening Booth- where parents could voice their interests and concerns and I could spark discussion by chronicling my own developmental challenges of parenting Sage and Cory as infants and toddlers.

What was most remarkable at Booth was that everyone who worked there was committed to the vision and mission. This included the dietary, administrative and housekeeping staff as well as physicians, midwives, social workers, and educators. Parents helped design Booth and helped craft their programs. It was also remarkably diverse. Founders Ruth Wilf and John Franklin intentionally set out to create a hospital that did not distinguish between “clinic’ and “private pay” patients. All insurance was accepted. Families included pregnant teens, highly educated college professors, health care professionals and Muslim women seeking female birth attendants. Booth was truly successful in treating everyone with respect and having the same high-quality care for all.

It was at Booth that I first encountered Maternity Care Coalition. In 1983, I was invited to represent Booth at the then small and mostly volunteer coalition. I remember being eight months pregnant and climbing the steps to the third floor of the office at Welfare Rights organization in North Philadelphia where I attended my first meeting. MCC founder, Sister Teresita Hinnegan and recently hired part-time advocate, Dorothy Jordan greeted me. The agenda was addressing the outrageous infant mortality rates in Philadelphia and the disturbing disparities that had two to three times the number of African –American babies die before their first birthday. What could we do? We agreed to collect data, listen to neighborhood women and mobilize the community to address the problem.

In thinking back to my Booth days, I realized much of what I learned there shaped my values and approach here at MCC. It is most visible in MCC’s Statement of Beliefs. The woman, infant, and family have always been at the center at MCC. “Pregnancy is a state of wellness, birth as normal, and parenting as an opportunity for growth which requires extra support from family and community.” “MCC believes that people should make decisions about their own lives…supports the empowerment of individuals to make changes that improve the quality of their lives using a family-centered approach.” “MCC is committed to services that are inclusive….reaching out to the disenfranchised, impoverished, incarcerated, homeless, undocumented, substance using and victims of domestic violence”.

Booth created a vision and an example of how to support childbearing families. It was advocacy through action. MCC carries that torch today. So it is no surprise that many of Booth’s architects, employees, families, and babies are some of MCC’s greatest supporters and champions. And while the connection between Booth and MCC is not surprising, it is sometimes easy to lose sight of why we what we do, particularly when we are faced with so many challenges and unknowns. Because of this, it is especially important to celebrate the spirit of Booth Maternity and it’s enduring impact on MCC.