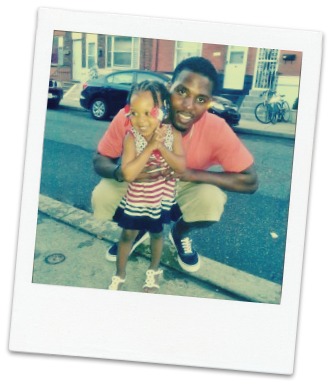 “We got involved with EHS when our daughter Kailani was born. At the time I was looking for a job and I only had a social security income, so it was a struggle just to get by.  EHS was nice enough to give us a playpen that could be converted into a bed, as well as clothes. We met lots of different families, we talked and shared our stories and our kids played together.

By December 2010, EHS had introduced me to the male involvement coordinator. He had heard about my commitment to EHS, at the time there weren’t a lot of fathers really involved in the center. We’ve had a fathers support group called “The Male Involvement Task Force”, a “Dads Can Cook” class, and “Share The Love Day” where EHS staff would take pictures of fathers and their kids on Valentine’s day and post them on the walls of the center. In June of 2011, EHS honored me with the Father of the Year Award, which was totally unexpected.”

I got involved with the Policy Council, was the President and Chairperson for 2 years and currently, I’m the co-chair. It’s taught me about leadership and how to run a meeting, how to speak in front of people. I was always a shy guy, but now I’m always making speeches and sharing my ideas with the group.

I’ve had my job for over a year and if it hadn’t been for EHS my life would have been much harder. I wouldn’t have had the pleasure of meeting so many great people, I wouldn’t have got involved with the Policy Council, I wouldn’t ever have realized that there were more benefits to being a parent. I wouldn’t have felt a part of something with the community. EHS to me is like an extended family and they’re always willing to help you when you’re down.”